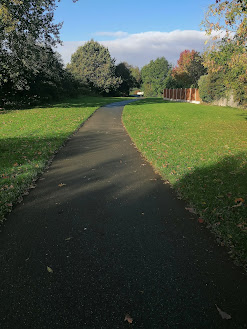 This is the path which leads to the town, and starts directly behind the house. I hope to be walking along the length of that path soon, my aim being to have a recce of the town but without my husband in tow, because he would get irritated with the non-manly trawl through what the shops have on offer. There is a womanly need in me to see where things can be bought, as I would like to stop buying off the internet and support local shops if possible. We have already managed to locally source four kitchen appliances and a broom.
I do not have a map of this area in my head at the moment, so it would be easy to get lost. At the moment my husband does the driving, but I am an independent woman and need to go solo. However, since the operation I am prone to dizzy spells so am not safe to drive, although on foot I am OK because I can park myself up by leaning on my walking pole until the dizziness goes away. I am working on finding a solution to the dizziness and it is reducing. I just need to get my confidence back.

According to my neighbour, a bus into town passes directly in front of the house. All she does, apparently, is to stand on the kerb and flag it down, but this does not appeal to me because I would feel an idiot waving my arms at a bus whose driver may, or may not, stop to pick me up. For me, the most logical thing is to find the bus stop nearest to the house, so that when I walk into town I can catch a bus back. So, walking along the path to the town has become a 'To Do' project. I shall drive again, but not yet.

Boots on, walking pole in hand, and off I went for a hunt for the bus stops, but first to do a practice walk along the path. which just so  happens to have the  coffee shop I was telling you about in a previous blog...... 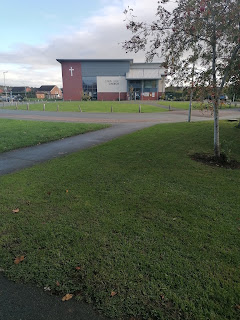 So if you were me, what would you do if a deluge of rain was suddenly unleashed upon you, just as you were passing in the vicinity of the coffee shop?
You would stop and take shelter, that is what you would do......

And do you think that it would be impolite to take shelter without buying a coffee and a bun? 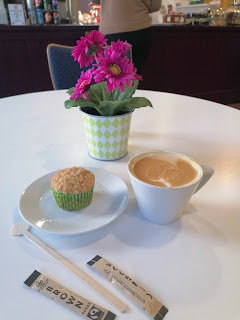 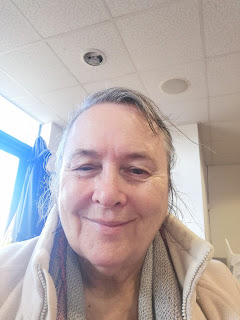 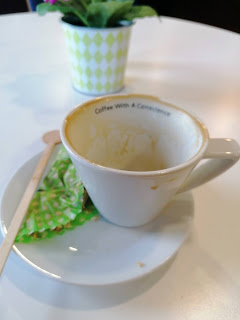 And returning home, still no bus stops found, but I had a joyful time in the rain after being fortified by coffee and a bun! 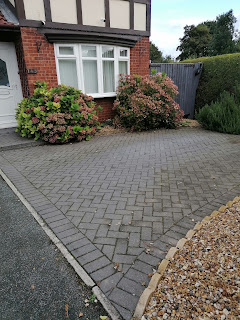 What a lovely, lovely spot you are now located in! I've often heard of all the walking paths in your part of the world and envy you them. Wonderful exercise while walking through bucolic scenery. Here's hoping you'll feel confident to drive your vehicle soon, but in the meantime I think you should feel free to toddle over to your coffee shop and imbibe on whatever looks good. I'd consider it therapy! ;o)

The coffee and the bun look delicious, Vera, and just the perfect thing after a storm. It is good to see your smiling face again!

Lovely experience on a rainy day! A walk followed by entering a coffee shop and having a delicious treat of coffee and bun! Love your smiling photo!

MAMA PEA: On my next toddle to the coffee shop I shall have a slice of chocolate cake in honour of you, and shall definitely not feel guilty because you gave me permission to use that cake as therapy! Thank you.

TB: I try to smile as often as I can...... it does help me get through this post operation time. The coffee and bun were delicious, and the sense of peace I had as I ate them was also delicious!

You deserved that coffee and cake. Good on you for keeping on moving. Onwards and upwards!

DUTA....Thanks Duta, I don't suppose you get much rain in your part of the world!

LOCAL ALIEN......It is sometimes hard to keep going 'Onwards and upwards' as we all know, but even a tiny step forward contributes to keeping going! Thanks.

Quiet and Sun by Alexa said...

It looks like You hava an invisible bus stop ;) I hope You will get better.

ALEXA....I am hoping that the 'invisible bus stop' will magic itself into reality soon! Thanks for your kind comment.

A few more steps at a time, life returns normal

TRAVEL, I am learning to be patience. It is taking time!

TRAVEL, I am learning to be patience. It is taking time!

Great excuse to stop for a drink and a bun 😊 I would have certainly done the same. Despite being wet you are looking well. Take care Diane