Through the open window I heard the first tweets of the Dawn Chorus, that joyful singing of the little birds as they greet the day. It was not a large sing song this morning though, just a little male bird starting to wake up his voice, refreshing his repertory ready to engage a female in his desire to create more of his species.

It turned into a precious day, a day which had Spring gracing the hours of the day, and saw me out in the garden and chatting to the neighours, feeling the warmth of the sun on my back as the buds on the trees swelled up in the sun's warmth.

We have put an offer in for the house we viewed on Saturday. It was accepted. 'Jasmine cottage' is the name of the property.....

And today I have a heart scan again. Apparently the one which was taken during my hospital stay was too fuzzy.

Off to do some meditation to prepare for the day, and ask for blessings of help from The Universe at the same time. I shall ask for you as well.

Astra Zeneca,  what are you doing to me, for you have made me all stiffo and slightly wobbly.
Punched into my arm yesterday morning, you and I have been introduced by The Government.
It was a requirement of my surgeon, the one who will be excavating in me to patch things up, that I have the vaccine, because this is what Astra Zeneca is, a Covid vaccine.
With me and my partner expecting dire things to happen, it was with a sense of relief that all I experienced was a day of very mild flu like symptoms. Although I did go to bed for a few hours, I really did not need to, but thought I would anyway....sort of as a present to myself for getting the vaccine done.
Today I feel all woozy-headed, which may or may not be as a result of the vaccine, or it may be because of the endless hours we have spent on our computers scrolling up and down as we start searching again for a home for ourselves.
The Telford bungalow is now filed away in history. A search found that there were some irregularities to the title deed documents, so we had to let it go. A day or two of mourning for the loss of hope, then we got another packet of hope out of our mental cupboards, and are now off to view another property this afternoon.
It is amazing that we still seem to have enough 'packets of 'hope' to keep going..... that and 'keeping faith that everything will somehow turn out alright'......
Bye for now,
Vx
Posted by Vera at 09:36 13 comments:

It has been a while since I blogged, but life has got in the way unfortunately. Although not particularly chaotic, certain events required me to have deep thinking times, which rendered me without the words to send onto the pages of this blog.

So, Deep Thinking Time One:

In October 2020, despite the lockdowns in France, we had people come to view the farm, which we had put up for sale when we left in May 2020 due to circumstances beyond our control. 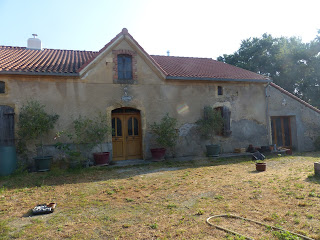 Despite our doubts that the young couple would go through with the sale....they did just that, and on 29th January 2021 the farm became theirs.
Much heart felt thinking have I done over the last few weeks as a result. For a while I felt a sense of loss, almost of home sickness, for the farm, and the life style we had there. 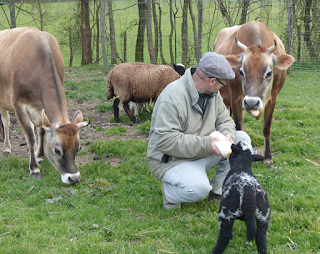 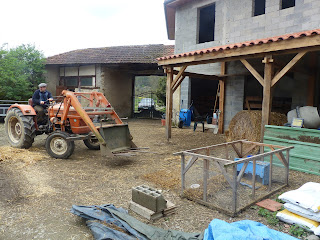 Thirteen years of hard work, and good work, and fun, and downturns and upturns, .......living life, that is what we were doing. But now the farm is in the hands of a young French couple, who hope to continue on what we have built. Time to move on, that is what we are now doing, but only after a lot of thinking time has been spent on making this transition.

Since May 2020 we have been living in a typical English country cottage, which is rented while we search for a new home. We thought that we would move into a house in the country, maybe with a bit of land. A continuation of the smallholding life, we thought. But the months of 2020 brought about Deep Thinking Time Two, that perhaps we were done with smallholding life, that we had enjoyed the experience but that the memories of that life belonged to France and not England. Gradually we were shifting away from that life, and allowing ourselves to do so without holding on to what had been.
A week before Christmas, and we thought we might have a look at a ground floor dwelling, in other words....a bungalow. Now in my head I have always equated bungalows with old age pensioners......somewhere where you would live when most of your faculties were gone...... but my partner was adamant that we should view the property.
To my surprise it ticked all the boxes, previous viewings of houses having given us the experience of what we needed to have in a home and what we didn't. Mostly it was to do with floor space for an office, a craft room, a recording room, and maybe somewhere where a meditation room could be set up as well. We were not too bothered by the size of our actual living space, it was the work space which was most important. As for the garden, we found ourselves not wanting agricultural space, but maybe somewhere which would give us a garden which was more of a hobby rather than a 'must do'. The bungalow ticked all these boxes.
We are currently in the process of purchasing the bungalow. I shall show you photos of it if and when it becomes our home. There are several factors, all to do with finances, which might scupper the purchase. But the bungalow is on New Road, Telford, Shropshire, and is called Libourne. A search on the internet said that Libourne is the name of a village in Aquitaine, France. This village is just north of where the farm is, which is called Labartere. So if we do end up with the bungalow, every time I say its name it will remind me of the connection we had with France. It will feel as if Labartere has led to Libourne, and I am really alright with that, and see the hand of Greater Forces moving me along with the plan of my life.