Up came the carrots, 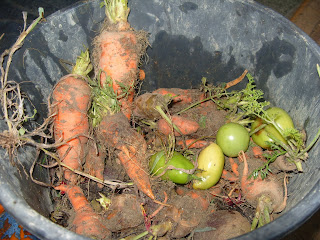 .... and wow what a surprise ....mostly because of the state in which they came out of the earth. But it was not the earth stuck fast to them in all their nooks and crannies and holes and missing bits, no, it was the unruly state of their diverse shapes which was a surprise, with bits of tagged on growths in abundance along their bent and gnarled bodies.

But I am ashamed to say that I was a little disappointed at the state of them, although perhaps I should have lifted them out of the ground sooner than what I did, but then I have spent huge chunks of time in the kitchen of late, and time had ran away with me. Ah the joys of harvest time.

I must admit that getting these carrots into this state of being.... 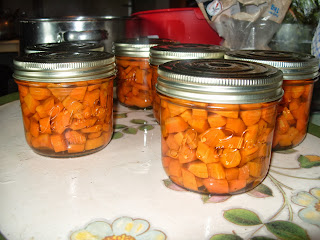 ....was not the joy that perhaps it should have been. 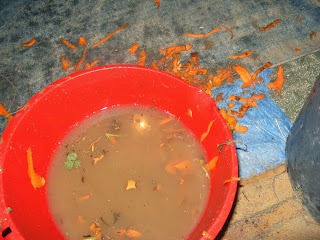 ...not that I minded, after all one should expect earth to be attached to any vegetable coming out of the ground, but it was the amount of carrot to be donated to the pigs which was a surprise.... 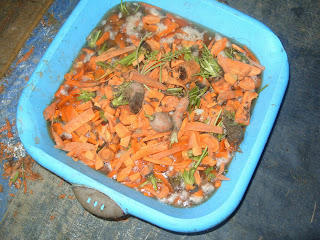 ....because to get the carrots into a long slick shape similar to those I was used to purchasing from the supermarket I had to cut a hell of a lot of carrot away. And even then they were not the pretty things that I was used to.... 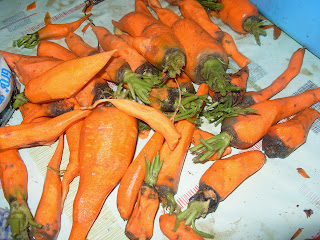 ...and a thought came into my head. How on earth do those supermarket carrots all look the same. What do they do to them that makes them similar to each other. Where are the bendy bits, the gnarled lumps, the holes, the individuality. What has happened to them along the way. They have been designed, that's what they have been. They have been cloned.

And so ends another learning curve. I am sorry that I was miserable about my carrots, and that I was drenched in feelings of it not being a worthwhile crop. And I am sorry that I was less than generous to them in thought as I chopped and carved my way into their interiors. After all, they had given their best so I should give them mine. A lesson, I think, to take into other areas of my life, not that I shall be chopping or carving anyone or anything up,
it is just that perhaps one should look beneath the surface to see the good sometimes.

And the carrots tasted fantastic!
Posted by Vera at 06:12 11 comments:

Oh itsy bitsy butterfly
flitting here,
flitting there,
just a murmer on the breeze,
that is what you are.

Oh itsy bitsy butterfly,
it is nice to see you fly,
so delicate,
so graceful,
so full of eggs,
which simply have to be laid
ones, twos, threes, or more,
all in a neat little row,
this I have discovered,
as I observe my once rampant cabbages,
the spines of which are still in situ
but the leaves are now all gone,
gone away into the hungry mouths
of the itsy bitsy butterfly's progeny,
some of which are now swimming in the watering can,
hopefully never to munch on my cabbages
ever again,
for I have deceased this progeny,
yes I have.

Oh itsy bitsy butterfly,
there are other nursery spots to be found,
but not in my veg plot,
and not on my three remaining cabbages,
for I shall call war down upon your caterpillar littl'uns,
but not with sprays and poisons,
but with my fingers,
for I shall deftly pluck each one
from the cabbage leaf upon which it is gorging,
and decease it.

So on you go little itsy bitsy butterfly,
to live your life to the full,
and lay your eggs in profusion,
but not in my veg plot,
not this year,
after all,
I have only three cabbages left,
so please spare them.
Thankyou
Posted by Vera at 22:47 6 comments:

Our larder is coming along

We have a tray full of green tomatoes,
for eating, chutney, and eventually ripening,
whereupon they will be canned.

We have buckets of figs on the kitchen table,
already twenty one jars of jam has been made,
and eight jars of chutney,
and a big bag of dehydrated slices
for nibbles.
So more going to be dehydrated today.
Figs keep you going,
as they do dogs who eat them.
We know this to be a fact
because of the evidence lying on the floor this morning.

We have a row of aubergines (egg plants),
sitting on the table as well.
Don't know what to do with them,
so, dehydrate them for the moment,
then sort out how to eat them later on.
Same with the little pile of chillies.

We had a few bags of windfall apples donated to us,
and they are sitting underneath the table,
apart from the pot of cooked apples,
waiting to be whizzed in the food processor,
to go into canning jars for apple pies later on.
So, another 'must do' task is to cook the rest
before they rot,
windfall apples mostly being bruised and magotty.

Also underneath the table
we have a bucketful of long red onions,
which are going into the dehydrator,
when time permits.
Kibbled onions is what they are going to be,
I think.

We have a fridge full of milk,
waiting to have the cream lifted off,
waiting for the cheese to be,
and the little piggies,
waiting to gobble the milk down,
which they do at maximum speed,
snortling and squealing fit to bust,
if no milk appears
to sate their appetites.

We have two freezers full of mostly meat,
which needs to go into jars and canned,
because we need more space
for the meat, which is still on the hoof out in the fields.
All this is waiting to be done.

We have potatoes waiting to be dug up,
the ground being soft now it has rained.
We have some already harvested,
and they are going to be canned.
We have beetroot to be harvested,
and that is to be canned as well.
As for the carrots,
them too.
And the parsley.
And then there is the coriander seeds,
and the fennel seeds,
all waiting for our attention.
Oh, and there are more tomatoes to come in.

So, with all this super duper efficiency going on
in regards to being self sufficient,
my time for actually feeding us has become minimal.
What I mean is,
that we are off to the local supermarket
for coffee and bun,
for breakfast,
because there is nothing readily available to eat,
because I am busy storing it away
for the future! 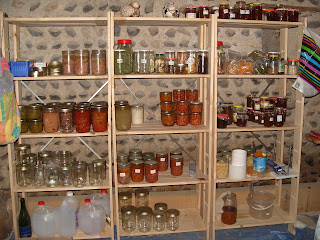 So today, as I change, I went paddling.
Yesterday I did the same.
The last of the high temperatures are just leaving us,
Lester is not chained to his computer any more,
so we wandered off to our river beach,
and paddled,
or rather, the dogs did,
we just got wet when they shook themselves by us.
It was a pleasure,
I paddled by default.

So then today, I also went paddling,
and it was another pleasurable experience.
For today,
I paddled in cement.
Yes I did!
With wellies on,
and garden rake in hand,
I paddled,
while Lester provided the cement for me to do so.

Four hours later,
and we were done.
One quarter of the sheep barn floor,
that is what we did.
And it is our first time of cementing a floor,
and I feel quite proud of us.

We have a manner about us,
Lester and I,
which encourages people to think that we are nonces.
Sometimes we even believe that ourselves.
But today we proved that we can do,
we had a go,
and we did.
Only three quarters of the floor left to do!
Posted by Vera at 05:17 9 comments: