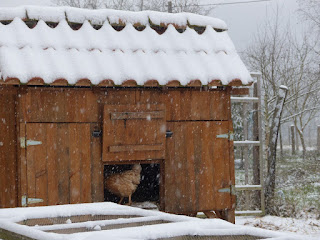 One little hen deciding that she is not going outside today. She has surveyed the white stuff, which is something she is unfamiliar with, and decided that it is too much to cope with. She is retreating from the world, that is what she is doing, but only for a moment.... 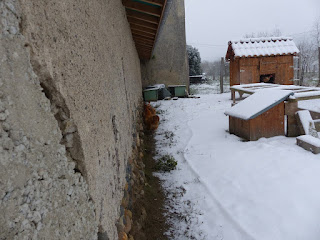 .... because here she is again, having a look to see if the world as she knows it is back to normal. Meanwhile, a little bunch of hens and  their favourite cockerel have ventured outside, but have tucked themselves alongside the wall where there is no snow. 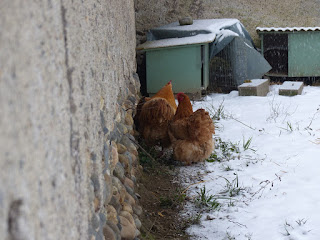 They are not happy. I wish I could cheer them up by letting them know that the temperatures are going up to 14C in a couple of days, and that soon everything will be back to normal. 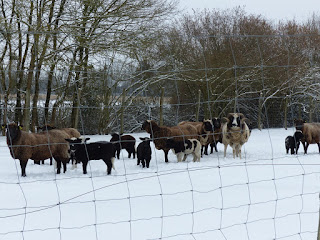 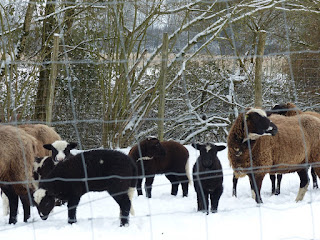 ...they are asking to go across the lane to the Side Field. No point, I tell them, there is snow there as well. They are not fussed with having to eat hay, but at least we still have plenty of hay left to see us through..... 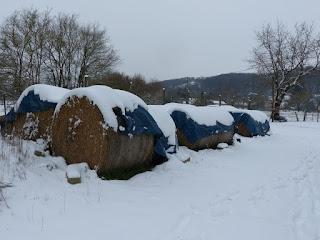 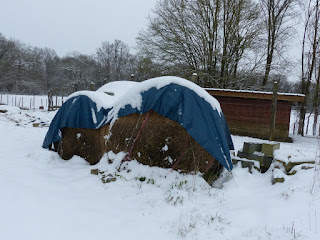 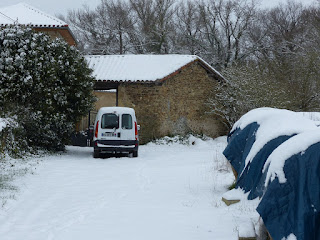 .... and the Front Field, so no grazing to be had there today. 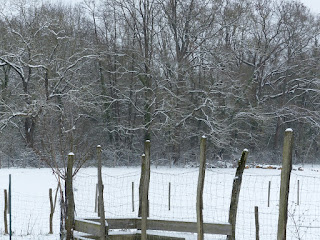 so indoors the cows and the new calf will
have to stay..... 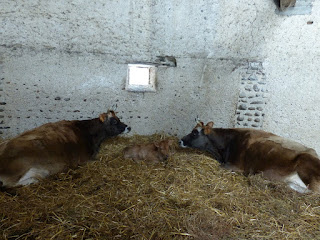 But at least Mazzie and Blue are enjoying the snow.. 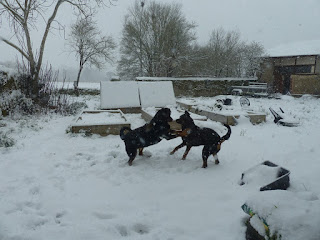 Two hours later, and more chickens have ventured forth.... 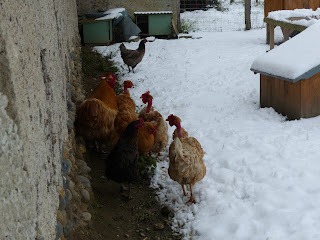 but there were still some in the hut having a think about things.... 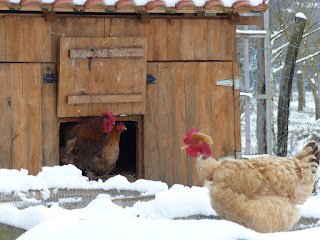 These three have been standing as if rooted to the spot. I think they do'nt know what to do next. 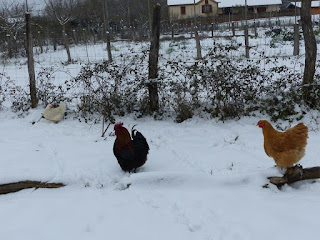 What a pleasure it was to wake up and see the snow. 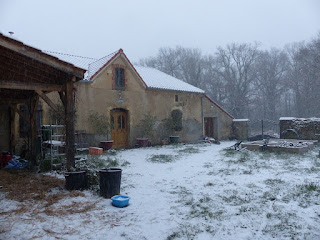 But it will not last long here, just for a few hours, and then it will be gone.
I love the snow and the way in which a fresh snow fall gives a different look to things.
I am not so keen on the wet muddiness it leaves behind.
Fortunately here in SW France we don't have much snow though, just enough to have a quick enjoyment of, and then it is gone.

Am off to cook up a pot of good stuff for the chickens to eat, hoping it might cheer them up.
They are doing excellent work for us by laying lots of eggs and digging over the veg plots. so I think they need a special treat.

I had a dream last night. It was short. Just a set of lock gates opening.

I don't dream every night, but this one was most welcome, as it was dream of encouragement, one that was posted into my head by the greater forces of the Universe.
So how do I know that it was coming in to my head rather than being a dream being invented by my head. Because the message which went with that dream was 'you are moving forward'. Wow! I would never invent a dream like that for myself. And anyway, my dreams are normally like watching a film, sometimes I am in them, sometimes I am an observer, but most times a story is being told, and very fascinating and interesting they are too.
So looking forward to seeing what transpires in the months ahead.

I recently joined a meditation group, a lovely bunch of people, not 'seriously earnest' types, just people wanting to get some balance in their lives in a vaguely Buddhist type of way. No chanting or anything like that, but they do sit on cushions on the floor but I don't, I sit on a chair because if I sat on the floor it would take me an age to get up again. This is something I would like to remedy this year, that I would like to be able to get down on the floor and then be able to get back up again without assistance, although I did manage to get back up again when my foot got into a tangle with a piece of string and I fetched up in a muddy puddle underneath the eaves of the gate house being drenched with falling water which was made up of melting hailstones. I was on my way out to the side field to get our small flock of sheep into shelter before their lambs succumbed to coldness from the freezing hailstones and rain. It is surprising what one can do when there is an urgent need coming from someone or something else. So it did not do for me too stay long in the puddle waiting to see where pain would strike because I was needed to be get those lambs back into the barn. I therefore became able, somehow, to get myself up, the need to be on the move. As I say, it is surprising what one can do when one has to.

But I really need to be able to get up from the floor in a more elegant manner, so once the weather gets warmer I shall start having a go at getting up and down. I would like to sit on a floor cushion while meditating like everyone else. Sitting on a chair makes me feel like an elderly lady, which I am not ready to be just yet.

Meditation is a word which, to me, has always meant effort. Trying to calm a very bouncy mind is something which is beyond me for most of the time. So why would I want to get my mind under control? Because it stops me from being at peace within myself, that's all. Does that matter? Well it does if I want to start writing again. And it does if I want to help my body to continue to heal after the hospital episode last October.

I had a dream last night. I have paid attention to it, and not dismissed it. If you ever have a dream which is clear and informative, then pay attention to it as well because it is meant to give you encouragement and hope, and to let you know that another you are heading towards another step in your life and that it will be alright.

First of all, do we sell the cows, or not?
- Do we convert back to having goats as the provider of our milk, or not?
Shall we keep the sheep? Yes, definitely. We have managed to get the flock numbers down to a manageable size, so no probs there.
- The chickens...... definitely keep them, and increase their numbers, probably using the old pig pens.
- What about the Market Garden Project? Haven't a clue what to do about that so waiting for Divine Intervention to show me the way.
- All in all, everything has got pushed up into the air, and this is because Lester is now having to go back to the UK several times a year, leaving me Home Alone.

Now it is a good thing that he is able to work from home, not so good that he is going to have to make that long twelve hour trip back to London. We know it takes that long because he has just got back from such a trip. I, meanwhile, did Home Alone with the farm, and I managed quite well, in fact better than I thought I would.

- I enticed the sheep to and fro the Side Field each day by bribing them with armfuls of hay.
Fortunately the lambs are only a few days old so stayed close to their mums. In a few days time they will be confident enough to get up to all sorts of shenanigans, which will include having gang romps anywhere else but where they should be going.

- The Chicken Gang and myself got used to being in close proximity to each other, and I learnt not to get impatient when waiting for them to go to bed at night, most of the hens preferring to climb through small holes in the fencing wire rather than come through the open gate, and them getting in to a fluster because they did not have the sense to understand that the reason that the hole in the wire was getting to be such a tight fit was because they were getting bigger as they headed towards maturity.

- Fortunately we do not have any pigs to look after at the moment, so just the cows.
Oh they are such big animals, with occasional attitude, and horns.

But I did manage to get ten big bags of hay brought from off the hay bales out on the Front Drive, which needed to be done daily. Day One of Home Alone saw me not being able lift one bag very well, but my Day Three I could manage three at once.
The cleaning of the pen, though, was not done with any efficiently. Lester uses a long shovel and a scoop to pick the poo up, but both were too heavy for me to lift at the same time, particularly if loaded with manure. So I 'borrowed' my washing up gloves and a bucket from the kitchen, and got the bigger clods up by hand, but only the piles of poo which were not anywhere near the feet of the cows. Those were left for Lester to sort out when he came home again.
But we have come to realise that looking after the cows is going to be too big a job for me when left Home Alone again, especially in the warmer weather when they will have to be got out on to the fields to graze, then brought in twice a day to be milked.
So we are now thinking that we might have to sell them, and buy goats.
This topic is an ongoing one with us, the solution not yet settled upon.

So, onwards we gallop towards the Spring.
I can feel the need to sort out seeds starting to whisper inside me.
Meanwhile I shall continue to enjoy the endless hours of doing crochet, knitting, and all the other things that there is no time to do once the warmer weather arrives.

Off to do something, not sure what, but it will probably be creative!