Our history with keeping bees,
and my thoughts about what our future direction should be.... 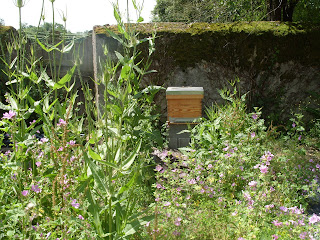 " Five days later and they were at it again, the first signs being a bunch of them flying around the front of the hive, not seeming to do anything other than hanging around. As the day moved on more bees gathered outside the hive, and as their numbers increased so did their energy, until the air became full of their loud buzzing. Gradually they started flying faster and faster, moving away from the front of the hive to fill the air for quite some distance in front of it.

So what did I do?
I stood in the middle of them as they flew around me. No need for the protection of a bee suit because they were too busy going through the swarming process to be bothered with me. I was calm and posed no threat, but from time to time a bee would pause in its flight, stop in front of me, and take a look, just to make sure.

But the day was getting on, and I had lunch to prepare. By the time I was finished the bees were beginning to settle together on the lower branches of a nearby tree, and were starting to bunch up. Only a few bees still flying around.

So I parked myself on a chair near to the swarm, put an umbrella up to shield myself from the sun, and watched. It was absolutely fascinating to watch the swarm tighten up into a ball of bees, and they reached a point when they seemed to quieten, so I said to them,
"If you would like to stay here you will be more than welcome, but if you want to go somewhere else, then that is OK as well". What I meant was that if the swarm stayed on the tree then they would be put into a hive, but if they wanted to go somewhere else then that was alright as well. Giving them a choice is what I was doing.

I didn't see them go because I was busy elsewhere, but when I saw them gone, I looked up into the sky and wished them bon voyage. It was like sending a grown up child out into the world.
And it came into my mind, that although we are not exactly the most efficient of bee keepers at the moment because we are not managing the hives well enough to get a honey harvest, (when bees swarm they take the stored honey with them), we are doing our bit towards helping the declining bee population by having a hive which is sufficiently healthy enough to act as a production line for swarms. "

So what do you do if you want to keep bees, but can't do that because you are not living in the right place to do so. Well you buy lots of books about bees, and enrol in a local bee keeping class, that is what you do.

And then you eventually move to the smallholding, and you do manage to find some bee hives, and you do purchase some bees, and then later on some more bees, and another couple of hives because the first ones were old and rotted, and you speak to a man in a bee shop who sells you a swarm of bees because all the bees you have so far have not survived, so you don't have to purchase another bunch of bees in the post, and that swarm does survive, but then gets eaten by Asian hornets, but not before your efforts to capture a secondary swarm from that hive results in you running off down the nearby lane in an effort to escape the fury of a bunch of bees who did now want to be caught despite you wearing a bee suit which actually let them get inside with you, so then you sort of give up trying to be bee keepers, at least for the time being.

So that is where we are at in regards to keeping bees. And I have to say that of all the animals we have here, the bees might have been the smallest but were the most complicated to look after, but I still have a fondness for them, and am not put off by the difficult attitudes they sometimes display. They are being themselves, that's all.

So, thoughts about keeping bees

I think a lot was against us when we tried to keep bees.

- First of all we were in a foreign country, and did not have the support structure which we would have done if we have been keeping bees in the UK. Here in France they do not seem to have bee keeping associations which you can go along to to get help and advice, which I think you need when you start keeping bees, although I have noticed that there is more help online nowadays. (2019)

- Second, a lot of other things were happening at the time we kept bees so we were not as attentive to their welfare as we perhaps could have been, this was particularly relevant to the attacks on the hives by Asian hornets. They are a big problem in our area, as is the spraying of chemicals on crops by the farmers, although there has been tighter control of which chemicals are used since we have lived in France. The Asian hornets are less easy to control.

- Thirdly, as I have said, we did not have the time to pay attention to them enough so we could understand their needs.


If you would like to keep bees, then find other bee keepers who will help you in the early stages. Better still, search out a local bee keeping association who will hold training courses to help get you started, plus you will be able to meet other people who are also new to bee keeping.

We bought our first swarm through the post, but I am not sure if that is the best way to start. By the time the package arrived the bees were already irritated with being kept in transit, plus the queen had died. 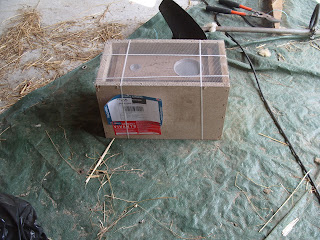 With our minimal use of the French language at that time, it was impossible for us to contact the seller to get a new queen, but we finally managed to buy a replacement queen from a beekeeper in the UK, who shipped her out to us. But I think it was too late by then for the swarm to settle happily into the hive with her, and within a few weeks all the bees had died.

Our preferred option would be to buy a swarm direct, and this we did. We had found a shop selling bees and equipment a half an hour drive away, which was good. What was not quite so good was the fact that the beekeeper asked us to take the hive to him in which the bees were to be kept, so that he could put our swarm into the hive and settle them down before we brought them back to the farm. Seemed like a good plan at first, but having to drive back home with a hive full of noisy bees in the back seat of the car was, to say the least, scary. In hindsight, we should have taken our trailer down and put the hive in that for transit. We shall know to do that should there be a next time!

But problems surfaced with this swarm, the main one being that there was still no one we could ask when we were unsure of what we needed to do. But we did gain a lot experience through having this hive, including the setting up of a sister hive when the original hive swarmed. It was the Asian hornets which killed both these hives off.

All in all, keeping bees is a wonderful occupation, and I have many blogging friends who are successful in keeping this wonderful little insect, and they inspire me to not to give up the Bee Project forever.

I am glad we tried to keep bees. I am sad that we were not successful, but I do encourage bees here at Labartere by growing as many flowers as we can, and this year we had lots of visiting bees in the garden, which makes up for us not having our own family of bees.