The silence that has been between then and now.....

The silence that has been between then and now....
Has something untoward fallen upon us here?
Have dire circumstances laid seige to us?

No, just sun filled days which have seduced me into being outside, that's all.
Which means less time spent indoors,
doing things like housework,  podcasty things, Lester's jacket......and so on. 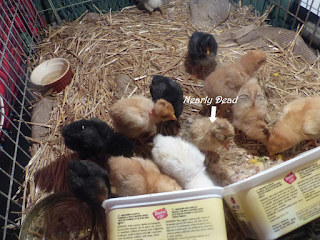 Of seventeen eggs which went in the incubator, twelve hatched, of which at least nine are cockerels.
Of the two late arrivals, one died almost immediately but the other one nearly died but didn't, and then nearly did but then didn't again. thereby encouraging us to name that little one Nearly Dead.
Nearly Dead is the one with the arrow pointing at him/her, although I think it a 'she' because her wing feathers are not long.
Despite having a damaged leg, being frequently trodden on and barged into, Nearly Dead has managed to survive. Her spirit is strong. She has fought to keep in life. So I hope she is a she. Most of the males will be going into the pot later on. I think we would find it difficult to cook him if she was a him. 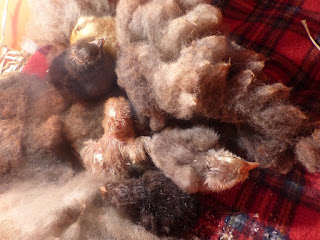 There are four newly hatched chicks cuddled up in a pile of sheep fleece. Can you spot them? 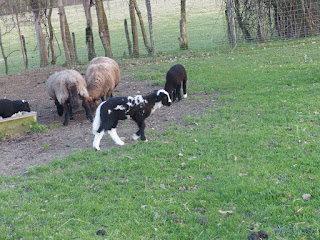 The lambs are here, eight in total, and are now at the stage of running round in a gang, causing mischief when they can. We anticipate escapees soon. If there is the slightest gap in the fence wire they will go through it. It is  the way of lambs. The need to discover the world is very strong within them.

Lester's Jacket Project remains in slow down. Blame the sunny weather for that. And the fact that the project belongs to the Podcast News.

Hope all is well in your part of the world,
bye for now,

With boldness I share with you my first vlog.
Much improvement needs to be made, but first steps, that is what this video reflects.

The video is unscripted, because that is what it had to be. To have scripted it would have made it too wooden in texture. I was nervous enough as it was, so it was better to have wandered my way through the video rather than followed a proper trail!

Lester was in bed for a much needed Saturday afternoon  nap after having worked long hours all week and I was at my computer not doing anything in particular, just messing about. But no, I was not going to waste my time any more, so I thought a little nap for myself would not be amiss, after all, we are going out this evening to a Chasse 'do', the Chasse being the local hunting fraternity, and Lester had remarked that he wouldn't mind joining the Chasse  although it was difficult to join. Off to the settee I went, but I had a sudden and enormous urge to take the opportunity to make my first podcast. So I did

For days I had been making notes about how to introduce myself, and had decided that I would  concentrate on fibre craft (sewing, knitting, etc) and keeping things simple for the time being while I find my feet with podcasting.

Earlier on we had been out in the field getting some hay for the cows and sheep from off the hay bales stored there. We also put some planks on the ground in front of the sheep barn, so the lambs and their mums could walk into the barn without sinking knee deep in mud.  It was very windy, and wet, and I got windblown, and my face got all red and wintery looking. I did not look my best. It was not the time to do a podcast, plus I had not made a list of subjects to speak about, plus I had not made a tidy 'studio' looking space to film. I did not have a tripod, ....actually I did have one, but I could not seem to fit the camera on to it. I did not have the words formed in my head as to what I was going to say, I was wearing my cold weather gear of scarf and shawl so was not dressed up as a lot of podcasters are, ......in short, this was not the time to do a podcast, but when greater forces are at work in my life I move, so I did, and I made a podcast, just a short one of less than twenty minutes, but I did.

And looking at that person in the camera, I wondered who she was. One thing, though, was that she made me laugh. Maybe the podcast was too short, as most that are fibre related are nearly an hour long, and I did not mention my wool arts, just the fabric, and I thought about doing it again but I am thinking that it might seem too stiff if I were to do so. I also did not mention any subjects which I would like to include in the future, thinking that this would be too much. So, I kept the podcast short, slightly scatty, but it was all of me and not some manufactured person who bears no resemblance to the real me. This is who I am, and I feel blessed that I do not feel the need to change myself in any way. I suppose that I am happy in my skin. And may I say that it has taken a long time to get to that state of being.

To post that podcast up feels scary, so I am sitting on it at the moment. It needs editing anyway. But I have been working on certain aspects of YouTube, and am taking down all the videos that I put on there during the earlier years of the blog. For some reason they feel inappropriate.

I am going along to a rehearsal with the little Marciac choir next week, and have been asked if I would take the accordion with me. I have accepted the position of chef d'orchestre, which is a grand name for conductor, but it seems they would like me to play as well. Maybe I will, maybe I won't. The accordion is not an easy instrument to play and if I lose concentration and disconnect as to where my hands are on the keyboard and chord buttons, and worse still, if I forget to pump the bellows up so there is no air in the instrument, then discord will happen, which I quite assure you happens frequently. Ah well, not to worry, I can always focus on playing the tambourine!

The lambs are popping out now, with the weather being  the most wetest and windyest it could be. But they are sturdy little beings, but it would be nice to have a sunny patch of weather for them to enjoy. Sun is not something they are familiar with yet. They are themselves though, and are frisking about as young lambs do.

And the menu for tonight:

That is a lot of food to get through, and it will take many hours to do so. The French sure do know how to put on a good spread of food! And all for 16 euros each. And all the wine for free, with Lester taking along a portion of twenty year old Armagnac in his hip flask just in case he and the friends we are going with would like a tot of the hard stuff during the evening!

Off to change, but we do not dress up here in France, we are country folk and so remain fairly countrified when out socially, which means I shall keep my thermals on. We shall also be mud splattered by the time we cross the courtyard and gate entrance to get to the car out on the drive because the rain is in persistent mode at the moment and mud is in abundance.

And Yay!!!! I have made a podcast! Don't what to do next, but shall wait and see. As I said, I shall sit on the project for now.