Not to worry, onwards Lester goes.
Today is a sunshine day.
It is hot.
He needs to finish today's portion of mowing.
He needs to get indoors for a cool down and a nap.

The little red squirrel thinks its ploy of pretending to be a fence post has won the day.
Lester lets it think so.
Does not holler at it to '****** off!"

He is now past the fence post,
He sees the little red squirrel turn itself around,
Sees it sit itself on top of the fence post.
Sees it observe the fruit above its head
Sees it reach for a fruit,
Sees it take a bite.
For it is a fruit tree under which it is sitting,

Ah, but the little red squirrel does not like the fruit,
Not yet anyway,
So it turns around and perkily bounces off to investigate elsewhere,
Lester sees it go.
He carries on mowing.......
As I have said, it is hot, hot, hot. 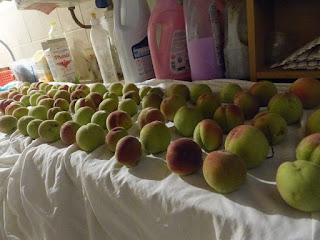 122 peaches picked and laid out on a cotton sheet to continue on their way to ripening.
They are in our back kitchen.
But Lester has left a few peaches on the tree,
For the little red squirrel and others.......

Now.....what am I going to do with all those peaches when they ripen!

Cherry time. So out I went to have a recce round the farm to see what was what and did we have any cherries to harvest this year. And yes, we did. Not  a ton of them, but enough, I thought, to make a small harvest.

Mission accomplished, cherries picked, canned. 10 quart sized jars for the larder, and five portions in containers for the freezer.

And when I was out and about on  the Cherry Project  I noticed that Veg Plot 2 looked like it had a nice patch of open brown soil in the middle of it, which sparked my interest. Upon further investigation it turned out to be manure from the cow barn, put there when Lester was daily emptying the cow poo, and then spread all about when he ran the tractor and cutter over the plots to keep the weeds down. We had decided not to do full on veg growing this year, and to leave the plots fallow, cutting them frequently to reduce the presence of big weeds.

But, oh joy of joys, here is Veg Plot 2. All of the green you see belongs to this plot: 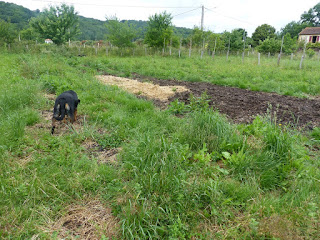 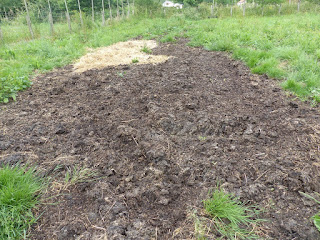 ....just yearning to be planted with stuff, like tomatoes, courgettes, and anything else I can think of. I know that we are now in June, but the weather has been chilly, and we do have a long growing season, and anyway....what the heck! Nothing ventured nothing gained.

So here is the plan: Lester will keep cutting the rest of the veg plot with the tractor, but I will take over this little patch. Since we are not keeping cows we have several hay and straw bales which need to be done something with, so I am going to have a go at smothering V's Patch with these bales. I am also going to use some of the tarpaulins which are covering the bales at the moment to put down alongside the Patch to extent it, with a view to reducing the weeds without having to dig, ready for the 2020 season.

Lester will not be allowed to trespass on V's Patch with the tractor.  I am going to have a go at the 'No Dig' method of cultivating the land, and I have already wheel barrowed some straw on to the Patch, as can be seen in the photo. There is a bale of straw by the gates of Veg Plot 1, which provided this straw. 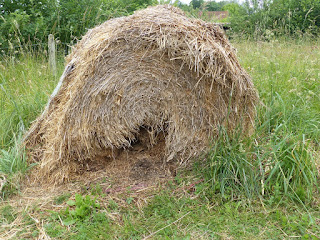 A hole! There has been a small hole for some time, but this hole looks as if it could hold a creature of menace: 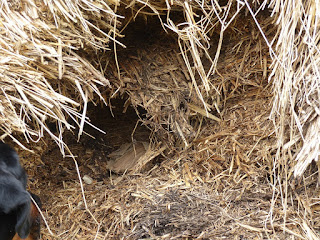 What think you? And what should I do?......poke it with a stick and hope that the creature in residence, if it is still there, runs away without putting up a fight? Get Lester to bring the tractor round and knock the bale over thus exposing all inside? Leave it alone, after all had I not said in my previous blog that we had made a haven for wild life? At what point is a creature considered not wanted here? I mean, what size are we talking about........

For the moment, then, Project 'Shift the Hay/Straw' is in stop mode. But I have planted some tomatoes, and I am on the move to get other seeds in. Meanwhile I shall keep talking, making a noise, singing,......etc.....when I am passing the bale, and hope that the occupant might decide to shift home because of the noisy neighbours.

When I was upstairs in the house the other day, I noticed the porta potti we used when we didn't have loo. A thought popped into my mind to bring it down and use it for wee's. I have wanted a compost toilet for a long time, but that is not do-able at the moment, but I could capture the wee, and then use it on the garden, maybe sprinkling it around the bale of straw, my thinking being that it is like cocking one's leg up a lamp post like a male dog does, marking one's territory, letting all know that I am here as well in case they don't know already!

Off to get the rest of the tomatoes planted,
so bye for now,

I was in error!

The tone of my last post reflected my mood of the moment, which was a general sadness and a vague sense of having somehow failed in being able to rise up to the challenge of running a self sufficient smallholding, a challenge which the Universe had delivered to us eleven years ago.

I was wrong. We have not failed.

So at the Knit and Natter group last Thursday the conversation rolled itself round to cats chasing birds, cats catching birds, and then cats were left behind and birds were then discussed, ....... different types which live here, bird watching, etc.....

And then a light bulb moment happened in my head, after a friend mentioned that we must have a paradise for birds here on the farm, what with the grassland we have being able to feed them and the amount of trees to provide shelter for them also. Such a casual remark, and I thought of when we arrived, how devoid of life the farm was......... 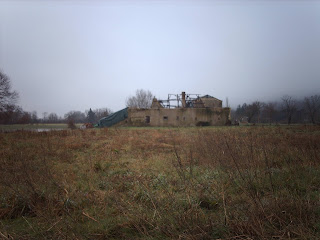 Eleven years on, and over 80 fruit trees have been planted providing flight corridors so little birds can fly safely between here and there. They can also help themselves the fruit harvests if we do not get to them soon enough. Our bird population has increased to such an extent that it is hardly ever silent here, someone is always chatting about something, this being brought to my attention when I am editing the footage for my YouTube videos because never is there silence in the background unless I am filming in the house.

We have been slow in keeping all the land cut and controlled, so we have lots of beautiful tall grasses in long swathes growing everywhere. While we feel that it looks untidy, thinking it should be mown short enough to be called a lawn, I have changed my mind after I saw a small bird feeding off of one of those grass heads. So we have short cut grass in places, and wild grass in other places. 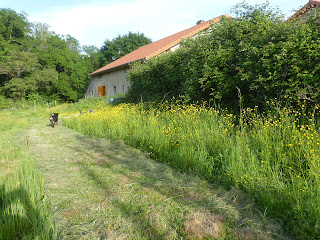 Because the fields are not being heavily grazed, the cows now living in a new home elsewhere in France, the fields are looking more like meadows, with sprinkles of wild flowers here and there. And I was slow to cut the Courtyard grass, so it also grew a lot of meadow flowers as well, and then I couldn't cut it because it looked so pretty and it was smothered in bees.

My 'light bulb' moment opened my eyes to what we have actually achieved for the land, especially the birds, the small birds like the sparrows, the ones who sing and chatter. We have given Labartere a life it did not have. I actually think that that is more important now.

I have learnt to look at what we have rather than what I think we should have, and to work within our limitations and be satisfied with that rather than being dissatisfied because of unreal expectations of ourselves. We have made a difference here.

We have done very well with smallholding life, becoming nearly self sufficient and loving the feeling of being in charge of our food. 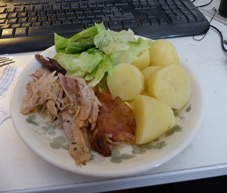 We had dairy products as well, with milk being provided by our two house cows: 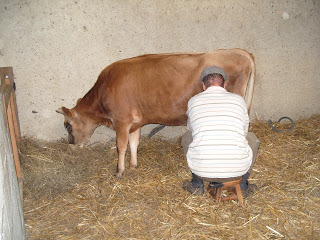 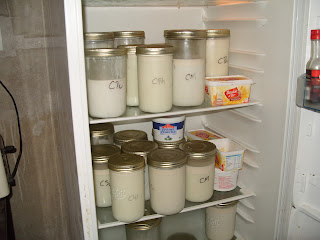 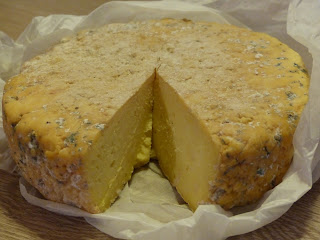 We have also had Tamworth pigs, a bunch of hens, a few geese, one duck, and a herd of sheep.

The sheep we still have, the geese were donated to a neighbour down the road, the duck went down the throat of a predator (probably a fox), and the hens have almost gone as well. We are down to three after another raid by something which required of their flesh. The pigs were despatched into the freezer. We have also kept goats, and they were also put into the freezer.

At one time the smallholding was humming with life, and in Spring the air was filled with the sounds of new life. It was magic.

And as I write this I am aware of how much sadness there is within me that we could not keep the smallholding at that level of productivity, because in 2017 my health failed and Lester was head hunted by an ex employer who made him a financial offer he could not refuse.

And that, my friend, put the brakes on being able to efficiently run the farm,  because growing your own food requires a lot of time and effort, which we ran out of.

And now the cows have left home, transported to a lovely young family up in the middle of France to become part of their small herd of house cows.
We nearly let them go last year, but stepped back at the last moment because we felt that the cows represented the heart of the smallholding, but a year on, and nothing changing in regards to the time constraints on Lester and me, well....... it was time to let them go.
I can't say that we were entirely happy about the saying goodbye to them, but we are glad of the time we have gained. It does mean, though, that we are becoming dependant again on commercial food production. This I am not happy with, but there is nothing I can do about it.

Hey ho, life goes on, and we have to take the ups and downs as part of the continuing pattern of life.

Meanwhile, I am getting back to growing our own veg,  in a small way at the moment and not for winter food storage, but at least I am picking  up the pace again after my lay off in 2018.
And I have taken over control of the courtyard, and have an arbre to sit it in, with a sunbed it it for afternoon snoozes when weather permits.
All in all, everything is going along well, and for that I am glad, even if we are not heading in quite
the same direction we were a while ago.
Not to worry, onwards........