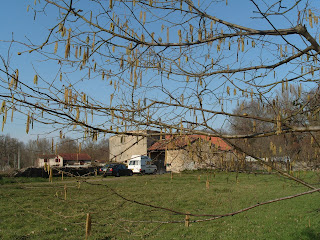 These catkins have been out for a while, but posted them up anyway. Love the dangliness of them, the way they dance in the lightest of breezes. 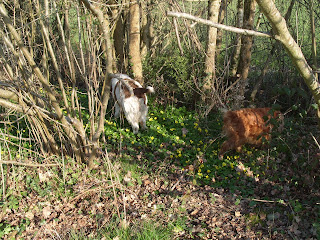 And Bools and Gussy investigating, and trampling on, a patch of spring flowers sheltering beneath the hazel tree with the dangling catkins. 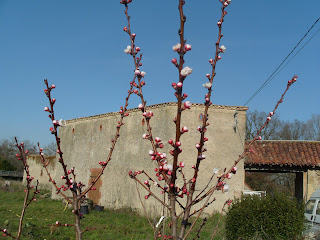 And the fruit trees just sqeezing themselves into blossoming..... 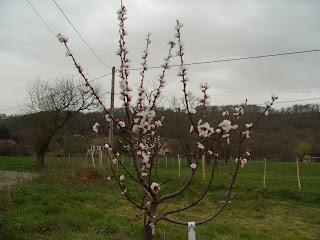 A
And managing with a flourish a couple of days later. You can see the side field in the background, with the newly planted posts. This is the dock filled sheep field. Docks doing well. Grass for grazing the sheep on, not so well. Been dry here for weeks. Cold, but dry. Thought the heavens might give us a drop or two of rain last night. Nope. Sheep arrive soon. Ah well. Not to worry. The rains will arrive soon. Slap me over the wrists if I dare to even mutter the slightest of moans about the mud and wetness when it does.
Mr T (of the sheep flock) came by yesterday. And delivered to us yet more rabbit hutches. Have given strict instructions to Hubs / Chief Rabbit Keeper that we do not need more rabbit hutches. 'We are not going to go into rabbit production, after all', I said.
This was met with a frown on his part. 'So can I keep the rabbits by the office?'
"NOOOOOoooooOOOOOO". I quite loudly responded, loud enough for the dogs to scarper, one under the bedroom caravan, the other under the old kitchen / potting shed caravan lest I be on a rampage against them.
Hubs looked even more frowny. "So WHERE can I keep them then".
"I don't know, but NOT HERE, not in the courtyard". Rabbits are fluffy. Rabbits are cute. They have long ears you can fondle. That is what I say.
Yes, but they also have meat you can eat, is what Hubs says.
And I agree. But only if I am given the meat to cook. Preferably in pieces, so I can't see the actual shape of the animal. And neither can I do bonding, because it would be like eating your friend. Rabbits are very bondable-with creatures. Therefore I can't have them living in the same proximity as us. Out in the fields, then yes, I could manage to see them as part of the living system at Labartere, the same as the other animals. But any living creature in the courtyard is family.
Which includes the robin who has taken it upon himself to partake of the food in the kitchen, and is often to be seen popping in for a snack. He is not to be shifted in his desire to share our food, even though Hubs / Chief Bird Scarer has tried by numerous methods to chase him out. Like yelling, "Get out you ********ing thief". Like imitating a windmill by flapping his arms about to make much wind. Like using a baton (handy piece of old wood) to poke in the air at it like a sword. Like grabbing a teatowel and flipping its botty. Like blocking up the small windows with perspex to prevent entry, leaving the large windows with their shutters closed to also prevent entry. However, I saw that robin literally squeeze himself through a gap in the shutters yesterday, after it had cheerfully perched on a chair near to where I was cooking to see if there was any food going. Bless. Which is not what Hubs / Former Chief Bird Scarer now retired, would say.
Re: the rabbit hutches. Their position is still 'To Be Decided'.
And here is what Mr T brought with him as well. Et voila.... 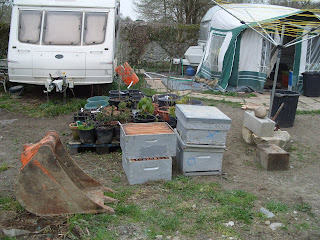 Mmmmmmm? None the wiser? OK, so let me take you for a recce round that patch of the courtyard. I know that it looks a mess, but it won't in the future. At some point all things will be banned apart from garden plants. For now, though......
To the left is the bedroom caravan and porta potti holding place. The orange box you can see propped up against it is Hubs's shower tray. Swinging right is the now retired kitchen caravan, the awning of which is now the potting shed. The black buckets in front are the soil savers in which the potting compost is kept. They were our recepticles for making nettle fertilizer last year. The smell from that rotting liquid has gone now. Which is good. It did chuck up a fair old stink.
Just in front of the bins is my washing line, with its artistic arrangement of sundry blocks of concrete and stone together with some old iron gate hinges, all of which defy my washing line to topple over. Which is won't do when empty, of course. But when it is fully loaded, then there is earnest discussion all the day long between the artistically arranged  pieces and the loaded washing line about who is going to stop doing their job first.  I often have to intervene with their squabbling. There was a moment the other day when the artful pieces decided to go on strike. I think they weren't fussed about the wind that was blowing the washing about. Thought that it was unfair that they had to work extra hard.
To the left of the washing area, is the nursery which is planted up with all sorts of goodies. Loads of saplings and cuttings, most of which are growing. Shame about the lemon tree which Hubs / Head Gardener had neglected to take inside during the last bout of cold weather. I think it is on its way to plant heaven.
To the front and left is the shovel head which belongs to the digger, which belongs to the builders. The digger is not here, but the head is.
Which leaves the pile of grey boxes in the middle. Four. Two bottoms, two tops. Et voila! Les ruches. The bee hives! Yeeeesssss! We have bee homes. No bees. But we do have their houses. So: Mr T said: Put the boxes out like this, after inserting these yellow sheets in these wooden frames and melting them so they stay put using my heat gun which you can borrow for the moment. Get citronella from the chemist, its like toothpaste. Doesn't cost much. Put bottom boxes out on site. Don't put them onto the ground because the river might flood them. Put them on blocks. Put the citronella paste on the front entrance of the hive. In May bees will come. If a small bunch arrives then they will live in the hive house. If a big bunch arrives then you will have to give them them an upstairs, which means putting the other box on. In autumn, take this top box off.  Open the lid, and  with a smoking implement have a look at the frames. If there are baby bees in a frame, just put it back into the bottom box. The queen will follow her babies and go back down there. Leaving you with the reward of the honey.
And that's all there is to it! Yes, well....... And here is Hubs / Head Beekeeper proudly showing you a ruche. Behind him is the shutters through which that robin squeezes when foraging in the house. 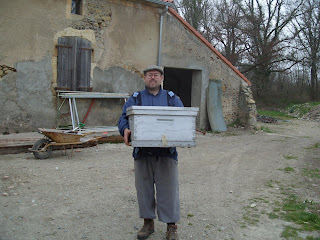 And so you have finally arrived at the end of this catchee-up blog. I hope you enjoyed your read and that it made you smile. Sending you loads of best wishes for a happy week ahead,...au revoir pour ce moment.
Posted by Vera at 09:46 7 comments:

Labels: The Bees, The fruit trees

A day of sunshine

Man oh man but it has been cold here again. Not to worry, though, because the sun has blessed us with a blast of warmth today which melted all the winter aches and pains away. Back came my energy, which had seemed to be somewhere else of late, and I could feel my body becoming more co-operative as the day heated up. So, no. I am not to be a creaky old lady yet.
And to prevent such creakiness coming on too soon, having become alarmed at the slowness of pace which me and Hubs seemed to have slid into during the late cold snap, I have ordered over the Internet....wait for it.......Cod Liver Oil. Yep! Cod Liver Oil. Liquid, not capsules. To be swigged first thing in the morning straight from the bottle. 'Yuk', I hear you say. And indeed I would also echo your 'Yuk'. It is, quite simply, vile. However, it is something that  must be done. Our joints need oiling, so needs must.

Today the builders turned up after an absence of nearly two months. Cheerily they waved at us as they drove up. Cheerily we waved back. It was good to see them. They have become like friends. So cups of English tea and pieces of homemade cake all round, and then they began laying the foundations for the front wall of the tall barn.
I wasn't going to do seeds this year. Too much to do elsewhere. However: as the sun came out so did my lusting for messing about with seeds suddenly spurt forth. Onto the Internet. Seeds ordered. Into the awning. Emptied that out. Going to be our 'potting shed'.
And the joy of spending an hour this evening acting as a 'go-for' for Hubs / Head Gardener, who, as 'man-in-charge', had the task of putting soil in containers provided by moi, then planting the seeds, again as provided by moi. There is something about having soiled fingers. Of feeling the earth. Of watering the seeds. And the 'looking to see if any have come up yet' even though they have only been planted for all of an hour. Such simple things really. But so grounding.
See this piece of chocolate? I would share it with you, but I have been busy in the 'potting shed' so need my energies revived. Hubs helped himself to a chunk of my choccy as well. Half actually. But then he needs his energies revived after his delicate finger work with the seeds.
I think me, Hubs, and Labartere might just have started coming out of the winter hibernation, although we are still wearing layers of clothing. Would rather be a little sweaty than risk divesting ourselves of layers which might become essential should the winter still want to keep us company.