A morning chat about right thinking.....

Chatting about winds, floods, phobias, fedupness, and generally cheering myself up!

The video is about twenty minutes long, and I thought I would share it with you.

The water riseth and falleth......

Hooray!!! No need for a sailboat!

Because this happened yesterday..... 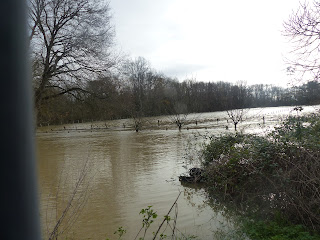 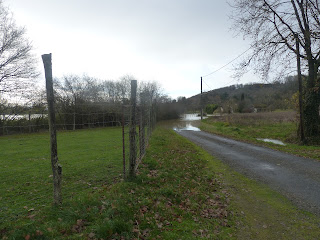 The water at the back the sheep paddock 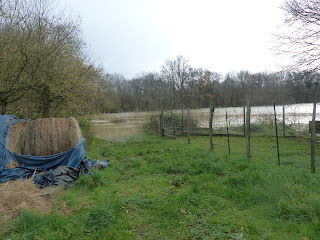 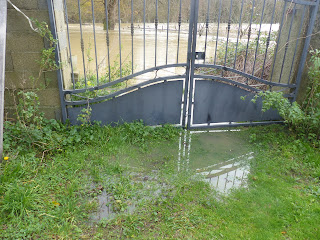 So what do you do to keep worrisome thoughts about everything, including your home,  possibly going to receive a goodly amount of river water sometime soon, you keep busy, that's what you do  and stay positive as best you can.

The day became a good one. Lots of chats with neighbours, French and English, which had a bonding effect between us all. Most were worse off than us. We spoke a lot of French as well, which was good.

You might be of the opinion that living beside the river we should expect flooding. You are right of course. We remain mindful that it can happen, it was just that the flood came unexpectedly after a year of rainy weather which should have had the river flooding so many times, but it didn't, so we had become complacent.

Not to worry...........the day passed, and then it became the next day, and relief zoomed our spirits right up into the sky as we saw green land again and not deep brown muddy flowing water. 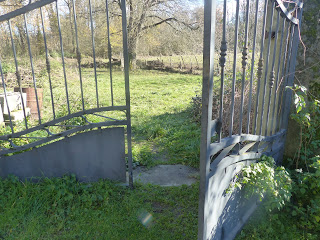 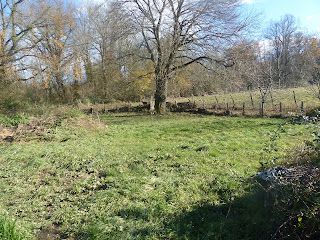 We also saw the damage to the fencing. Oh dear! Loads of work!

So what you do is to go buy some more hens to replace the ones that the dogs massacred the other day, which takes you away from the farm for a few hours, which is good, because then you see the countryside in all its soggy glory, which still holds a beauty even after all the battering it has had from the recent high winds and torrential rains, and you are reminded how lucky you are to be living in such a lovely place. 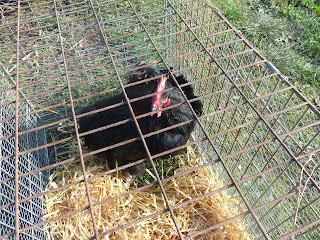 One of the seven black orpingtons chickens that have come to live here.

So when you feel a bit overwhelmed by things you have to keep going, and fight the heavy desire to give up, that is what you have to do, and that is why we went a chicken shopping.

Hope all is well in your part of the world,

The Weather! The Christmas Tree and her Angels!

So what to you do when you are in the midst of  unfriendly weather? Winds blowing up to 80 km / h,  torrential rain, everything saturated, main field flooded, which means the ditches are full up, which means that the sheep can't get onto the field to graze, which is why they are still in the barn complaining about the unfairness of it all and 'when are you going to feed us?'

So into town you hurry, to the man who sells the small bales of hay, but "No" he says, "I'm having a cup of coffee. Come back in half an hour". So you do a quick about turn, say "*******!", or words to that effect, and hurry back to home, meanwhile embracing the moment as best  you can as the wind plays with the car, which is not really a 'proper' car but a little white van, so can be easily buffeted about should the wind be in playful mode.

So you spend a wet time getting hay off an old hay bale, which is soaked on top, but dry underneath so you have to pull the wet hay off the bale first. You take the hay into the sheep barn. The sheep are not impressed and complain, but you hurry away, wanting to get back into the dry yourself.

So then you go to let the chickens out, and with gladness see the plump, fluffy, Orpington hen appear. You feel happy because she was done unto death by a pack of dogs from down the road who came on a rampage two days ago, killing three hens and shredding another to bits, although that hen has survived. The Orpington must have laid low until she thought it safe to appear again. We think the hens will stay under cover today. We hope the winds do not lift them up and away.

Back indoors, and on no, the fire needs to be lit. But you are now damp all over, so follow through with going and getting the firewood in from where it is stacked, which is just round the corner of the house. Oh dear, the tarpaulin has gone, the wood is wet, not to worry, carry on, fire lit, house warming up.

This, then, was what my husband was having to cope with this morning before he started on another strenuous day of computer work. The internet keeps switching on and off, and the electricity is trembling suggesting an imminent power cut. Not to worry, such are the joys of living in rural SW France.

No venturing forth into the outside world for me today, so meanwhile, I try to stay jolly by trying to get a load of fairy light angels to behave themselves, but most wouldn't. Some insisted on flying upside down, or sideways, or any way other except standing straight, except this one..... 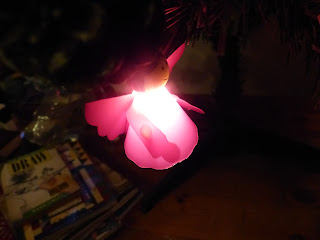 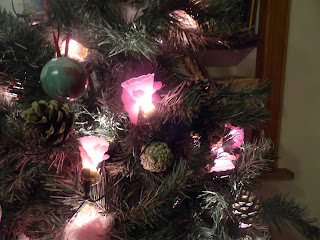 upside down and all about... 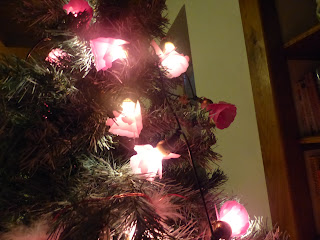 ........ not behaving in the manner which is required of an angel on a Christmas Tree, 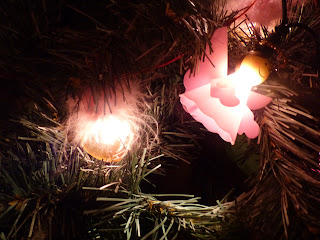 These angels have been donated to me, plus the string of fluffy pink hearts, together with a Christmas Tree on which to put them, by Laura, bless her, who is moving from SW France to the  south of Scotland in the next few weeks.

The tree is still work in progress. 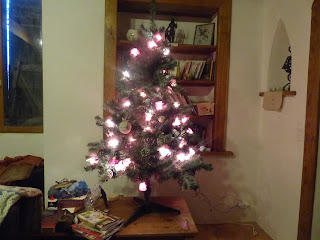 Our original Christmas Tree and decorations all became done unto death by drowning, or rather, taken down to the local tip, after their storage boxes became filled up with rain water during the January 2009 tempest.  It seems quite fitting that these angels and their tree were delivered in wet and windy conditions, which deteriorated into tempest like conditions today.

Thank you Laura, for this donation,
I wish you well in your journey forward in life,
and look forward to keeping in touch with news of your new adventures.

Meanwhile, the Christmas Tree and the romping about angels have given the house a cheerful ambience, which is much needed today.
We are now on red alert,
the flooding has continued all the day long,
the winds are bringing down trees, only one so far on our property,
but indoors we are cosy and warm,
so life is good.

Hello, here I am again. Been away from you for a while, but have been busy doing other things, which is no excuse I know. One of the reasons I have become a tad constipated with writing this blog is because it was supposed to be about the farm and our life as smallholders, but since we have had this slow down with the farm while my partner earns us a living on his computer, not much has happened outside. I did try and take over some of the farm work, but we have just had a humungously long, hot, wet, and humid summer, which stopped me in my tracks. So.........

We are living in France, so need to speak French, which we do. I can write it, and Lester can speak it, but not really to any high standard. Actually it is quite a low standard if I am to be honest. For a long time I have been thinking that we ought to improve our language skills, but this would have probably only stayed in my head if it had not been for a French lady asking me:
"How long have you been in France?" she asked chattily.
"About eleven years" I said, still in chatty mode myself.
"......but your French is not very good. Don't you want to speak it." she went on, still quite chattily.

Now you know when someone presses your button, the button which happens to be sitting over a sensitive subject, a button which needs to stay not pressed, because if it is pressed then you know you will go off on a rant? ........ Now feeling unchatty, and not even attempting to speak in French, in English I went off on one, defending the reasons as to why my French was not as good as it should be, all the while, in my heart, I knew that she was right. She was the prod I needed.

Duo Lingo was recommended to us, and  is an easy and addictive web site to use. We are both easier when speaking French, and are likely to engage with the French people a lot more as we continue using it.

However: recycling ……… at the recycling bins in the village just across the river, in the Gers, …. Saturday morning …… raining (again) ... Lester emptying our dustbin bags of recycling into one of the several bins lined up by the lake. ..... up comes a big, black, four by four car and stops inches  from our little white van, ….. out gets a big man …. who puts on his fancy dancy cowboy-type of hat ….  Ah, I think to myself, a chaise man …… ( local hunter of deer, wild boar, and anything else he can shoot) … he puffs himself up ..... and out comes a bunch of French words  .... they do not sound friendly …. I see Lester puff himself up as well, ..... and I hear him come out with a bunch of French words .... "good ole Duo Lingo I thought to myself" ...... and so on it went.....two men, one French, one English, which already could put them in opposition to each other,  one from the Gers protecting his village's recycling bins and the other from the Haute Pyrenees which is a region who does not have recycling bins. They argued, and argued, and argued, for ages. It was fascinating to watch. All the while I could hear Lester holding his own. I was very proud of him. I saw the French chaisse man deflate, become smaller.

We await the fallout from this confrontation. Apparently we are not allowed to put our recycling in the Gers. It looks like there is still territorial divisions between the various regions, but only with a certain generation of people. I suspect the younger people will not care.

We hear the  news about plastics. We want to recycle our plastics. The Haute Pyrenees does not have any facilities for this. We are obeying the pressure from social media to cut down on our plastics.
So we have bought a little incinerator so we can burn our paper and cardboard. But then that would fall into me encouraging global warming, which we already presumably do with our wood burning Rayburn. This is a no win situation all round. As for our plastics? Oh I shall just put them in the normal dustbin and not sort them out. We keep being told to recycle but.......

And I began thinking that perhaps it was not such good idea to do Duo Lingo. Because if you have a good  French vocabulary then you can have a stupendous argument with someone who is irritating you, but if  you don't have the vocabulary then all you could do is just turn away, or speak in English which is what irritates the French people no end.

Oh! I have a sudden image of chocolate. And blow me down, but there is a bar in the fridge. Sorry, will have to go and satisfy me.

Hope all is well with you,