Zooming about all over the place......

I don't think it's me, that I live a quiet life and am not out and about on the roads very often, I don't think that it's me.........but lately I have noticed that most of the cars seem to be zooming about, far to fast for safety, and all oblivious to there being such a thing as a speed limit, and overtaking so close to our little van that it is a marvel that they do not clip our backside. 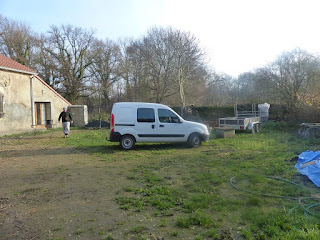 Most cars will want to overtake our van if they can. I used to drive a delightful little two toned grey  Citroen 2CV when I was in the UK. This was years ago, but it has always remained my most loved car even though it had to be sold as it was not big enough to carry all the rolls of fabric from fabric warehouses in Brick Lane (near Petticoat Lane in London), back to where my shop was, which was on the Isle of Sheppey, in Kent. That little car was such a workhorse, was light to drive as a ballerina on pointy toes especially round corners when it could be driven as if it was a motor bike, which means that I could swing her slightly wider at the start of a corner, then launch her into the curve as the corner continued round its arc. It was splendid fun. The suspension on her would allow her to keep her wheels firmly anchored on the road but let her body swing over, just like a motor bike does. But not a racing circuit type of motor bike, just a day tripper type of motorcyclist, one who has a modicum of madness.

These are photos from the internet 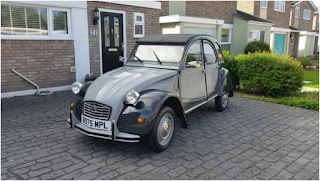 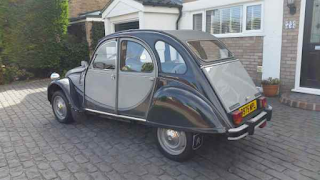 As I say, that Citroen lady would dance about, safely but lightly, along the roads, could be fully loaded up (with the back seats left at home) with rolls of fabric and would then drive quite sedately, but still safely, along the middle lane of the motorway for two hours to get home, with the same speed as when she was unloaded and empty. She was a joy.

But it was the other drivers who hated that Citroen lady, and would get into a fume if they could not overtake her. My partner would not believe me at the time, until the day he had to borrow her and became subjected to lots of road rage from other drivers, almost getting into a punch up with one driver. That was in  the 1980's. And so now, in 2019, it would seem that other drivers, here in France, have a dislike for small cars.  We travel at a good speed, but not a crazy one, and frequently find other cars glued to our rump until they can overtake us, sometimes dangerously.

The French government have become alarmed at the amount of road deaths, and two years ago reduced the speed limit on main roads to what they considered a safer speed. It did not work. The deaths increased. So in 2022 they are proposing to insist on governors being put into cars, which are aimed at stopping drivers from exceeding the designated  speed limit of the particular stretch of road they are on. It's a bit like  'big brother' in a way, but there is definitely a madness  brewing in most car drivers at the moment. Perhaps it is the arrival of Spring. Perhaps the blood is pumping hard, and the energy which is thus produced needs to be used up somehow. France has a lot of straight roads, the foot can be put down hard, and zoom mode happens.

Ah well, it is as it is. Perhaps the speed of the cars can be controlled by satellites up in the heavens, but maybe the drivers will get crosser and more frustrated. We shall wait and see........

And the Citroen lady was sold on to a young man, whose first car it was. I am sure that she was driven hard. She would have liked that. And I went on to own an old  black double wheeled van, which carried me to markets around Kent very efficiently. It was just as efficient at taking me to local nightclubs for these were my ' break loose ' years. There was nothing quite so satisfying as parking that scruffy black van  in front of the venue alongside the posh and shiny vehicles.

During my time as owner of that van I learnt to park in difficult places by hanging out of the sliding doors so I could  see the spot  which I had to aim for, market places being very cramped on space especially when other vendors where  setting up their stalls as well. I became very good at parking. But that was then. Apparently that skill has faded, according to my efforts yesterday at parking our little white van in an under cover parking area. I think it is because I cannot lean out of the door sideways to watch where I am going. This is when going backwards. Going forwards is alright.


It would seem that my preferred type of car / van  is one which is more of a workhorse rather than a car which is for leisure, so I shall continue to be patient with ' less than patient'  drivers. As for the black van, that never got bullied because it was bigger than most leisure cars of that time, who would have come off worst in a bump with me because the van was already had a bumpy surface anyway. I did say that it was an old girl!

Off I go into my day. It is nearly noon, but I have not started the usual activities of the day yet, just been chatting with you.

First of all I want to say thank you to all of my blogging world friends who took the time to watch the first vlog and leave such encouraging comments.


So what I have been doing is  making a new blog page for the vlogs, which are now called The Psychic Craftswoman. Snippets can carry on as usual, which is as a written blog because I think that perhaps not everyone will want to watch a video, but would rather keep in touch with us via the written word. The two blogs are linked, so it is easy to move between them, if you want to.

Anyway, it has taken me a lot of courage to keep going with the vlogs, but I now know what I need to do and the format that I need to follow. I have a long way to go though, but it is excellent stimulation for my mind and stops it from getting tired and old. Well that's not true! I do still get tired but it is more a happy tiredness rather than a miserable tiredness! And I find it personally amazing that I am entering the world of vlogging which is mostly a young person's world, while I am sitting very firmly in the over 70's age group. But we shall not think of age, rather think of living in a life well travelled, but not necessarily in terms of air miles, or being grandly wealthy, but in terms of accumulated achievements and a broadness of self worth and wisdom.

Meanwhile,........... I have had a couple of screws screwed into my jaw in preparation for a couple of synthetic teeth to be screwed on to them in three months time. I can't say that it was the most pleasurable experience I have had, especially because my face was completely covered over by a sterilized cover except for where my mouth was, so I couldn't see anything and could only hear the sound of the work going on......like the drilling, the sound and feel of the screws going in, etc. Not to worry, I came through it alright, although my jaw feels not quite in its usual self, which must be as a result of the manipulations of it by the dentist.

The weather is now more in sync with what it normally is for this time of year, although it is still warm. There is a feeling, however, that winter is not quite finished with us yet. Sprinkles of blossom are appearing on some of the trees, which means that spring is urging its way forward, albeit a little on the early side. I want to hold the onset of spring back. For once it begins it will not seem very long before we are again looking towards the festive season again.

The lambs are growing fast, and most are now eating grass, but they still have time to have lamb gang gallops and plays, where they charge around the field in a mad gallop. It is a joy to watch.

The chicks are growing, and Nearly Dead has new legs and feet, or so it seems. After having been born with a crooked leg so she couldn't walk properly, she can now charge around with the rest of the chicks. Somehow she seems to have become magicked up with proper legs.


Here is the link to the latest vlog, where I chat about the ongoing saga of getting my partner's jacket made, husband or partner chat, the chicks and Nearly Dead, me and my nearly deads, the need to float and not sink, and introducing the Green Jumper Knitting Project, amongst other things.


.
The link to The Psychic Craftswoman blog page is on the top right hand side bar.