For thirteen years we lived on a smallholding in France and then circumstances overtook us and we find ourselves back in England, but not in the South East as before, but in Shropshire, which is in the Midlands. At the moment we are in the middle of making this transition between the two countries, are living in rented accommodation with all our belongings still in the South West of France because of the Covid restrictions of the two countries.....meanwhile we are looking for a place of our own, but are in no hurry because our rented cottage is a lovely place to spend our transition time in...........

These notes were taken from the blog, when we were in full flow with living the life of smallholders.

"I don't want to seem maudling, or difficult, or silly, but having been conditioned to buying meat from a supermarket shelf for years, to recycle our animals after tending to their welfare and getting to know them, ........well.....it does take an adjustment to our thinking, which we are doing, step by step.

Smallholding, or small farm living, is the best of lives to live but one has to learn new ways, create new habits of thought, grapple with many new activities, not mind that one's hands and fingernails no longer look pristine, or that one's clothes do not seem to stay clean for very long because there is always something or someone wanting to leave their mark on you. And the tiredness which accompanies this steep new learning curve. That, too, can be draining.

But it is all worth it. I only have to take my mind back to the lifestyle I had in the UK, before we began our French smallholding life. It was a very comfortable and safe life, but it was making us too complacent, and to be quite honest, a dullness was creeping in because of the habits we were living under. Fortunately all that changed when we left the shore of the UK, and embraced this challenge. Facing challenges wakes you up. We might be tired sometimes, but we have life energy, and at 63 years of  age, that is the best blessing I could be given.

So if you are thinking of heading off into other directions in your life: do it! You might not be watching your recycled bit of sheep bubble away in a pot on your cooker, but your new direction might require of you some steep learning curves as well. This is good because it takes you away from the emotional mud which bogs others down, who are too afraid to break the day to day cycle of their lives and who therefore become old before their time.

I'm going to be old someday. When I am 104. Meanwhile, I have to go put that piece of lamb in the oven to give it a bit of a roasting. "

Wow, what a great ten years to put into memory, and how glad I am that we took up the challenge to go to France, even if most people who knew us thought we were just plain stupid.

During the last year or so of living in France we became jaded about smallholding life, that it was too strenuous a life style, that it was difficult to earn a living from a smallholding especially because of the French tax system,  and then Brexit appeared, and so on......... And it was our intent to never run a smallholding again, which we followed through with when we arrived in Shropshire and started looking at small houses with tiny gardens.

But as the weeks have passed, we  find ourselves looking at houses online which have bigger gardens, and the other day my OH mentioned that he would like to have a large greenhouse so he could investigate the aquaponic system of growing things, while I would still like to investigate the growing of micro greens. It would seem that we are not quite done with being smallholders, even if it is on a smaller, more manageable, scale! 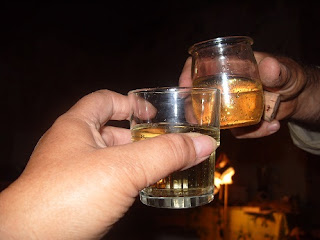 What a contrast, Vera. What a journey. And here’s to you finding the perfect place for the two of you, for the next instalment of your life adventure. x

I'm curious as to why SW France was chosen? Why not Paphos in Cyprus or Algarve in Portugal , which have a better climate and a substantial number of Brits living there which makes the barrier of language inexistent, and mentality an easier issue. I'm sure you could have found your smallholding in these regions too.

DENISE: We are not in any hurry to leave the cottage, but you never know what is round the corner!

DUTA: SW France was within travelling distance by road. Cyprus and Portugal are too far, and we never wanted to be within the Brits communities of those countries anyway. The language barrier was not a factor in why we left France. It was the UK pulling out of the EU and the rules and regulations in France that virtually strangle entrepreneurs or anyone wanting to be self employed. We were always comfortable with French people, and spoke the language well enough to communicate.

Gosh, this reminds me of me saying no more renovation of houses and within 6 months of selling our house I wanted to go to a get a sniff of sawdust again. Our intellect and our hearts doesn't always match up.
KJ

Doesn't it seem that you two are in the perfect spot right now in that it is affording you not only a comfortable time but a time to think and ponder and make decisions as to the next phase without being pushed or rushed into it?! You tried the full-blown small holding life in France and that didn't work out for various reasons but, oh my, how much you learned! With that experience under your belts, this next phase will be all the better for you.

Hi Vera. Would you not consider getting an allotment near by?

ANONYMOUS: I know what you mean...... at the moment we have are thinking that we might grow things again, but just now my husband mentioned that he thought that we shouldn't buy an already done up house, but that we should buy something which needed work! Our farm in France was derelict when we bought it, and we lived in caravans for five years. Not sure I would like to do the same again though!

MAMA PEA: Thanks for your wise words, and yes....everything is as it should be, and this time of moving from one chapter to another chapter in our lives, with an interval in between for reflection and rest, absolutely necessary!

NORTHSIDER DAVE: I don't think that there are any allotments in our area, but there are a lot of older people who can't use their large gardens anymore, so perhaps to take over one of these gardens and use it as an allotment would be a plan. Thanks for the suggestion.

Good to know you're enjoying your new venture despite the tough times. Hope it all works out okay.

Hello Vera. I'm always interested in reading about folk's journeys when pulling up stakes and starting a new life elsewhere, especially when older. Home is wherever you choose, and there are always new folks to meet and new friends to make. Good luck in your search!

ROSALEA: Thanks for the encouragement......to look forward in life instead of to looking back and becoming regretful, that is how we try to be. Most days we do manage that, but just sometimes we do fall in a heap and wonder what the hell we are doing!

Happy Birthday (three weeks late.) (I really should check in more often.) Farming is physically hard, a small greenhouse in the right climate could be nice for homegrown tomatoes and such. It is good to hear from you. It will all work out in the end.