And then the rest arrived

So, anyway, I was having a browse amongst the Classified Adverts on the website Anglo Info, and my eyes chanced to land upon an advert posted a couple of weeks old: For sale: chickens.
And for some reason, not sure why, I posted a response, asking if they were still for sale. Now already we have Gang One, arriving unexpectedly, and living in the recycled pig arc until we can get the Back Field fenced and their new house built. We have no room for anymore. Really. We Do No Have Any More Room!
Yes. The chickens were still for sale, but the flock was to stay intact. OK, I says, will pop round tomorrow and buy them. Now why did I do that! What bit of my brain makes me take these leaps!
And here they are: Gang Two: 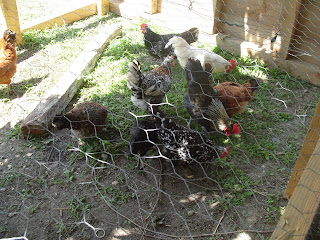 
Meanwhile, Hubs urgently assembled a run for The Gangs: 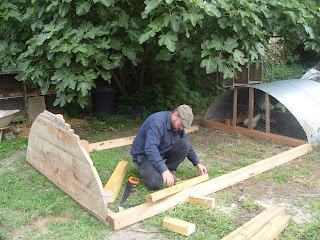 And then we went shopping. Come along, Sara says, to a market on Sunday. We went, there to purchase two more hens. Limousin's apparently, with the darlingest fluffy rears which looks like frothy petticoats. None of The Gangs have these fluffy bums, and they are smaller as well, including the cocks. These are  new hens are grand hens, creamy coloured with bits of white and black, and very, very elegant.
Back at base camp: there has been a division between Gang 1 and Gang 2. Gang 1 now has a leader, the white cockerel having taken it upon himself to become king of that little flock, which  comprises all the juveniles. I am glad for him, because he has found his role. And here he is with his little band: 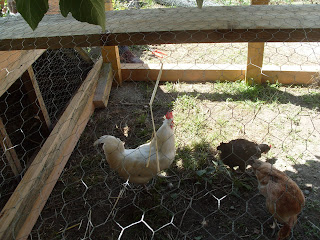 The darker cockerel has the rest of them, which he probably always did have, but the new girls are undecided as to who to run with. And yesterday we had our first egg, delivered by one of the new girls. But I think that it was probably one which was in 'the pipeline' so to speak, and expect there  will be no other eggs for a while until they settle down.
For two more days they will remain in their accommodation. Then the door will be opened and out they will come. They are free range chickens, and must therefore have adventures out and about. Bools and Gus wait in anticipation.
And we are networked now. The Dark Cockerel makes it be known, to all who would listen, that he has arrived. At day break he starts, and twenty minutes or so thereafter he yells his head off. Most times he quietens down once I deliver unto him and his girls some food. They have the main arena, which is the exterior run, and maintain dominance over this patch when food arrives. I have to sneak the food into the back door of the run for The White Cockerel's flock. He has also started crowing. It can be quite noisy here. All day it can be noisy. Cockerels do not necessarily speak their voice at dawn. At any time during the day they can sound off as well. Ah well...such is country life!
So now we have two flocks of chickens, and Hubs will have to build two new houses. And we have our first egg! Wow! And somehow, in the space a few days, we have acquired fourteen chickens!
Posted by Vera at 08:04

Just wait until they all start laying, and being free range they will find all the impossible places! You will be living on omelette and quiche! Hope you have no foxes around there:(
Diane

Hello Diane. We are training our chickens to respond to a red pot. So what we do is put the feed into the pot, and both the noise of the grain rattling in the pot and the colour of the pot grabs their attention. Then they are fed, but in their run. And this will continue when they are out and about. They will be called in for regular snacks, and for the last one of the day they will be kept in for the night for their safety. As for eating the eggs ...loads of things you can do with them, including passing them on to the pigs. And then there are the people who have already said that they will buy them from us, so lets hope for great egg laying energies from our feathered troops! Hope you have a good week, and keep taking loads of photos.

He's very handy your hubs - do you rent him out?!!!xxx

Roz! Saturday I did think that I might put him out on loan, but I got over it! (He was tired and cruddy) Nice to hear from you as you haven't blogged recently, so hope you are well.

Your first egg, Wow! That calls for a little celebration. The eggs of your chickens will be very good in taste as the chickens are going to be out in nature, free of antibiotics and chemicals in their food. Well done!

Duta:) I was very proud of those chickens which laid those eggs - felt like team work all round!